Had you told me a few years ago that I would be sitting at my computer writing this tribute to my mother, I would have called you crazy.

I grew up with a mom who usually seemed as strong as steel. She was rarely sick, composed of DNA that kept my grandma a live into her 90s, my grandfather into his mid-80s, and great-grandfather past 100. However, I’ve learned over the past 24 months that cancer doesn’t discriminate. Once it grabs hold, it may never let go — to any of us, at any time.

The following isn’t about the disease. Instead, it’s about what my mom, my brother and sister, and I learned along the way.

Deep breath… and so here it goes. I hope the following words help you as much as I think they’ll help me.

The end began in September of 2014 — when Mom’s bladder was so full, her insides felt like they were on fire and something was about to burst. I got to her house where she was crying in the bathroom. Urine was pouring out of her like a waterfall. Plus, she could barely make a bowel movement and she couldn’t eat.

It was more than obvious she was having a recurrence from her first diagnosis from December of 2012. A huge tumor was compressing her insides.

After being rushed to the emergency room and admitted to Loma Linda University Medical Center, she was given a catheter and an emergency colostomy.

She would never use the toilet again — her urine went in one bag and her feces into another.

One day shortly thereafter, I found myself in the bathroom thanking the universe for the ability to have a bowel movement and empty my bladder. I’d never considered what a luxury it could be — something so simple.

Mom was soon unable to walk without a walker, then had to be transported by wheelchair, until finally she couldn’t leave her bed.

I’m now more aware than ever that a single step is a blessing. The freedom and energy to take a shower by myself is bliss.

And the ability to walk up and down stairs? A miracle.

2. It’s Not About Me & Control Is an Illusion

“Life is what happens to us while we are making other plans,” once wrote Allen Saunders. Cliché, isn’t it?

But it’s also true. Mom didn’t have any control over what was happening to her body. Cancer ripped through her insides like a wildfire.My siblings and I tried so hard to make it not true. We tried to give her the right food, inspire her to keep moving, get her to the doctor for a solution. The list goes on.

Surgery was scheduled for November 17, 2014. They were going to try to extract her massive tumor. Long story short, they couldn’t. Her surgical team had to close her back up.

“Treasure every moment with her,” her surgeon told me. End of story.

The only control I had in the situation was to pour myself into her last days of life, and that I did.Once she returnedhome, I slept next to her nearly every night. I’d hold her hand and tell her I loved her every chance I got.

Life takes us not necessarily to where we want to go, but to where we need to grow. I’ve grown in ways I never thought possible, and I’m thankful for this now.

When Mom came home from the hospital, she was determined to be a fighter. She’d do the exercises her physical therapists gave her — even when she hurt like hell. She tried her best to keep her wits about her, even when she was clearly losing the battle.

To be honest, sometimes I felt like running away. Watching my mom dwindle down to skin and bones was horrendous. Several times she shook with pain and even screamed out loud. This rocked my foundation to the core.

“You’re given what you need when you need it the most,” my mom had shared with me over the years.

I became certain — the best thing I could do for my mom was put on the strongest front possible. And then, in my private time, I could cry my eyes out and ask the universe why the hell my mom had to suffer.Sometimes I had to make split-second decisions over doctors, medicines, and other major issues. These moments began to fuel me with the understanding that I could stay focused and balanced under pressure.

Yes, it’s true. I know now that we’re all stronger than we think.We’re powerful beings (both you and I) — we’ve just got dig in and face the raging storm with passion.

4. Love &Tenderness Are Everything

The final night of my mother’s life came all too quickly.I stood watching her shoulders rise and fall withher labored breath.

I held her hand to my mouth and kissed it. I ran my hand through her beautiful hair.I kissed her forehead, her high cheek bones, and her shoulder. I tried to memorize each of her moles and scars.

“Mom, I love you so much. You are my best friend,” I told her. She was unresponsive at this point, but it felt right to tell her everything that was on my mind. “I promise to make you proud.”

In this last moment, memories of our journey together flooded my mind. The times that I was able to feed her, get her ready for bed, and try my hardest to assure her that everything would be alright.

I recalled her attempts to be tender as well. The sweet messages she’d leave on my phone, even when she was in the midst of her greatest suffering. Or when (with the very little energy she had) she’d take her slender fingers and attempt to tickle my head or back — like she did when I was a child.

5. She Lives in and Around Me

That night, I discovered one of her phone messages from December 28, one of the evenings I had decided to drive to my home for a bit of a break. I had never listened to it.

Please listen to it before you continue.

And so, I closed my eyes and laid down to sleep — the first night that I was motherless.

Upon hearing this message, tears began to flow. How could our journey together be over? How the heck could I live without her for the many years I have left to live?

I began to panic. But just when I felt like I was slipping into to a full-blown panic attack, her soft and beautiful voice began whispering into my consciousness.She took me to a recent memory — the moment she was about ready to go into her last major surgery.

Mom was laying on a gurney as the nurses were getting ready to take her away, and she said to me, “Jen, anytime I get really stressed about something, I just close my eyes and breathe. I can transport myself anywhere I’d like. Always remember that you have that ability.”

I remember looking at her and thinking to myself,We have a fucking rock star of a mother.

And so, I closed my eyes and laid down to sleep — the first night that I was motherless.

I transported myself to the happiest moments in time with her. I could see her smile, hear her laugh… feel her hand in mine.

I then drifted off into a deep sleep. 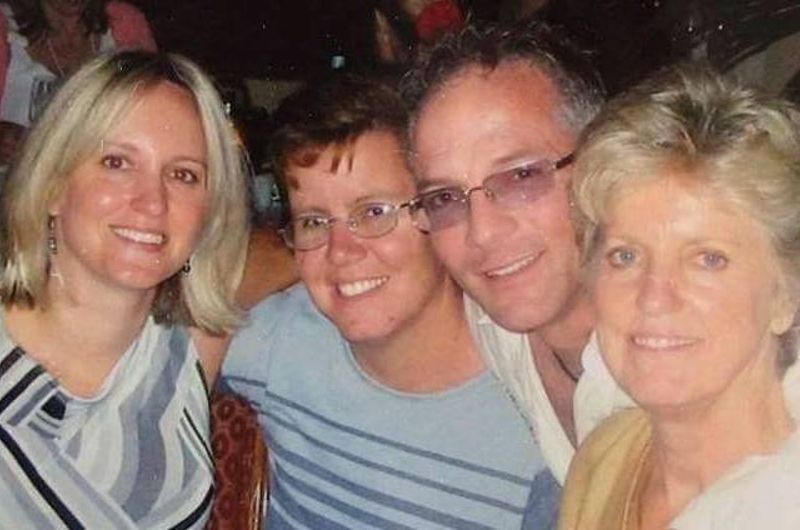 My dear mother —as we (Craig, Ann, and I)lay you down to rest,we want the world to know about your graciousness. Your beauty. Your strength. You are a champion of dreams, unconditional, and truly authentic.

Thank you for giving me life.

Love, your daughter and forever friend,